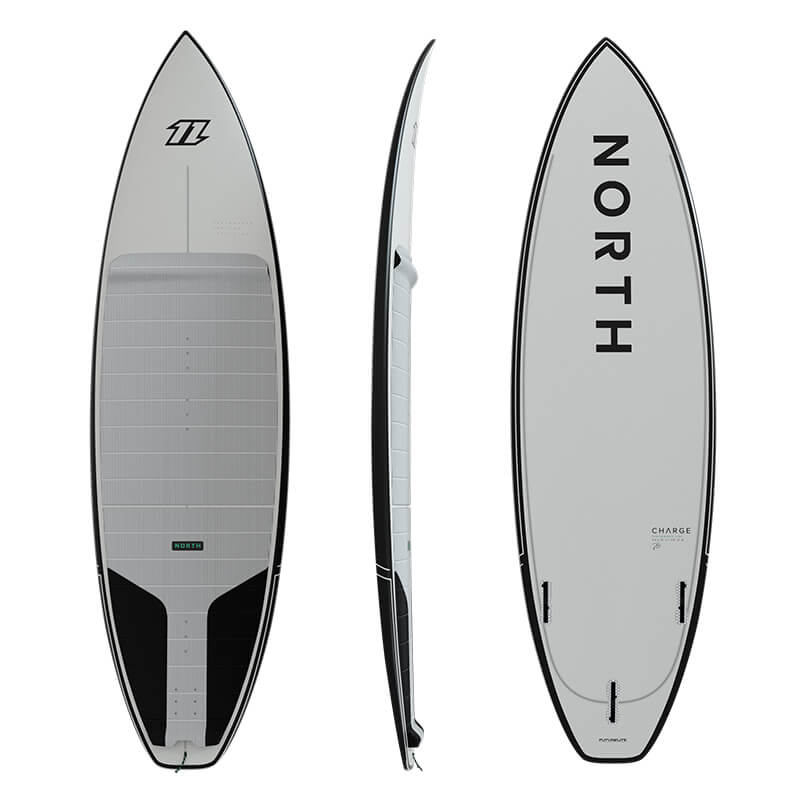 The Charge has been in the North surfboard line up for a couple of years now, and we were pleased to see the 2023 version become all the more purposeful and chiseled for the task of slaying big waves. Perhaps less compromises have been made due to the redesign of the Cross and its repositioning in the North range, which excels in more mediocre conditions.

Liberated from the box, the Charge is a beauty to behold, with sleek traditional thruster surfboard aesthetics, a fuller nose and with a medium rocker. It’s from the same proven Duralite construction as the rest of the range, with a mixture of luxurious carbon and Innegra in key areas to keep vibration controlled and boost strength where necessary.

They’ve installed some EVA shock pads under the front foot to prevent heel dents. The bottom’s shape runs from a deep single concave under the front foot and has been increased subtly in the new model; this smooths out chop in a respectful manner without feeling too sucky. The rails have been chiseled a touch and provide a little more grip and control. Particularly in the back section of the tail, which sits somewhere between a square and squash design. Fins are FCS2, and the Hexcell fins provided are ultra-stiff, providing an absolute ton of grip. Deck pads are massively important to translate the feeling of the board through to your feet. The corduroy textured pad is thin but comfortable, and lets you know what’s going on underfoot. Along with the traditional rear kick pad, there’s a formidable front bump pad to let you get a nice wide stance for aerials.

At 90kg, the 5’11 was a perfect size for me for more lined up and tidy conditions; in the water it feels locked in, dynamic and ridiculously fast. For its intended usage North have struck an intelligent balance between lightweight and well built. It’s a mountain slayer you can ride into any situation with confidence and grip. That gentle front concave smooths out a bumpy wave face well. It thrives in down-the-line conditions and allows you to gauge the pocket with a lot of confidence. The rear-biased fin positioning and tail allow for an easy-to-access fin release to perform some big filthy tail slides off the lip. A long rail, with a squared off profile towards the back of the board, makes the Charge tuck upwind with ease. It  handles speed extremely well, and lends itself to rapid and powerful carves rather than a skatey feel, which again is where you might consider the Cross from the North range.

If you’re looking for a kite surfboard that likes to charge down the line, and fits well into the pocket of head-high waves plus, the Charge is the weapon of choice. It’s balanced and purposeful when it comes to heavy water. If you’ve got the conditions for it, it’s rude not to own a board like the Charge and liberate it in times of emergency for when shit gets real.