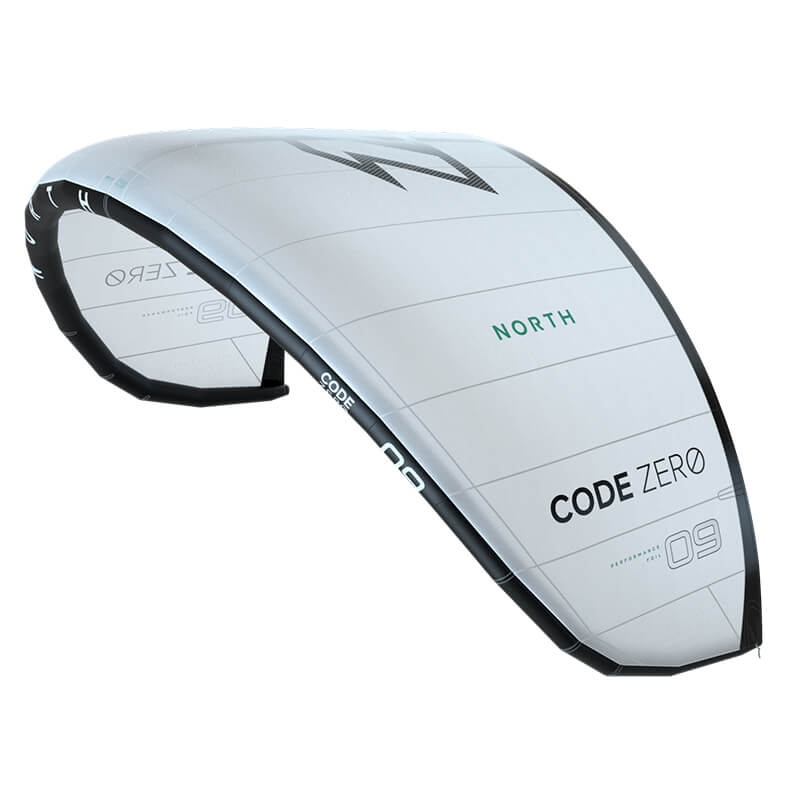 North are definitely both expanding and focusing their product range for 2023, and with a global market gliding off silently in a foiling tangent, a lightweight mono-strut designed with freeride kite foiling in mind is an extremely logical addition to their kite line up.

It’s no secret that North Actionsports Group and sailing industry stalwart North Sails dwell in the same portfolio of companies, with the kite brand able to utilize cutting edge resources from its big yachty brother. Perhaps to terrify the competition, they’ve very aptly borrowed the Code Zero name from a lightwind-specific reaching sail which is used on sailing boats both competitively and recreationally.

First off, let’s get the tech out of the way. We’re looking at a mid-aspect ratio delta-shaped mono-strut kite with fairly full wingtips and a fair amount of sweep. The trailing edge is slightly concave, and the leading edge has a fair amount of taper into the wingtips. The canopy layout incorporates a seam into the deepest section of the wing profile, just behind the leading edge, giving a little extra control through the canopy at that critical juncture. Materials-wise, they’ve utilized a lighter weight high strength Dacron coined N-Dure, in combination with a lighter bladder material to really nail that weight down. There’s also sensibly placed, but minimal Duralite reinforcement around the hang points and struts. Rather than employing more N-Dure on the trailing edge, they’ve opted for a double layer of ripstop to stabilize this all-important flap prone area on a mono-strut. The two larger sizes have some battens tucked in the trailing edge to help avoid this. Bridle-wise, it’s sporting the same low diameter pulley-free bridle as its stable mates to minimize parasitic drag and keep weight down. The result is a 9m mono-strut that comes in at 2.102kg, and in our experience flies quite eagerly from eight knots.

Once in the air you’re greeted with a mid bar pressure and sportive kite with a fairly pivotal turning characteristic. Its lack of struts and inherent efficiency means it feels fast across the window, and in turn climbs upwind extremely quickly. You can literally throw it around like an empty tracksuit with drift and maneuverability in spades.

Generating power is as simple as it should be, with an easy whip and sheet bouncing you up onto the foil; once you achieve speed, it’s equally as simple to then dump power on full sheet with very little vibration from the kite. Its nimble nature allows single-handed control and steering in both directions, seems to work well across the full bar stroke and allows you to stand up and open your body in a relaxed manner to get around your transitions with some grace. That instant power response on sheet will also rescue you if you do happen to come off balance.

The Code Zero is clearly designed to thrive in its low end, but the solid airframe keeps its shape admirably once it does get more powered up or loaded with a surf board. In light and gusty conditions, the Code Zero is going to give you an advantage over three-strut kites, particularly applicable to a pure waveriding scenario, where it’s highly important to keep the kite hanging whilst you nip down the line. The playful feel to the kite and drift ability turn their hand well to surfboard riding situations. The single-strut design also gives that reassuring structure which drastically helps relaunch over a strutless kite. Don’t underestimate the low end on the smaller sizes. We took the 5m out in winds where it shouldn’t really have worked, and it towed us around on a foil where others were on 9m and 11m. The smaller models benefit from running shorter line lengths for that ultimate playful free foil experience.

North have bridged an all-important gap in their product range with the Code Zero and launched a first generation mono-strut that is immediately competitive with long established models across brands. To say they’ve hit the ground running would be an understatement.