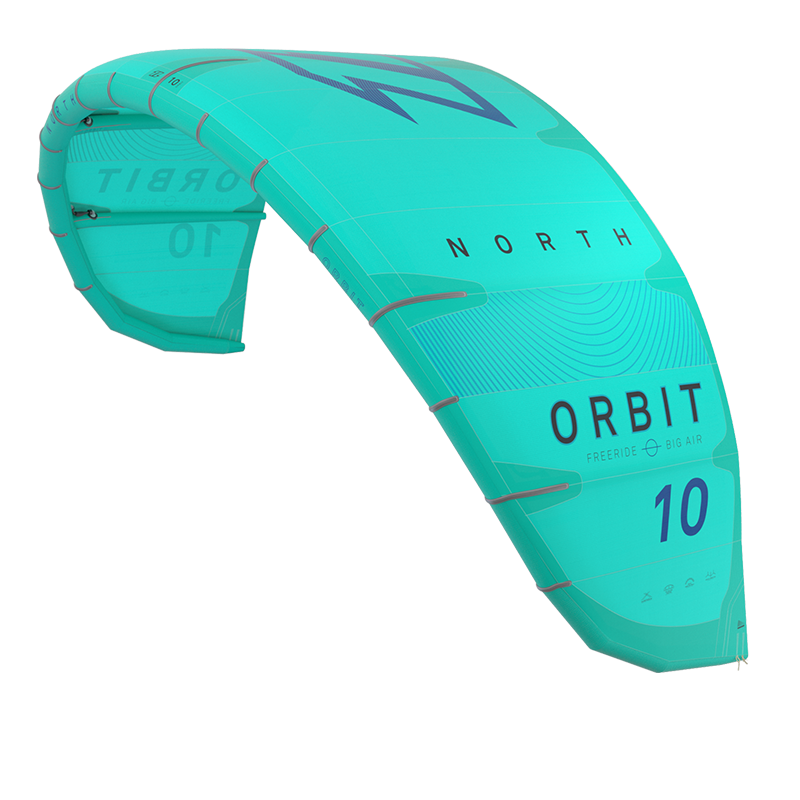 North Kiteboarding have landed with their new three kite line up. The name Orbit leaves little to the imagination on its intended use, and it is the five strut booster of the bunch, with freeride leanings. A common theme across most major brands at the moment. So, how does it measure up? From a build perspective all of the trappings you would expect from a top brand are present. You’ve got materials from Teijin, D2 cloth forms the bulk on the canopy, then a Dacron frame around the extremities to keep things tight. This scallops around the struts to stiffen the rear of the canopy nicely. There’s a liberal application of Kevlar on the tip ends and strut joints and some PVC on wear areas on the wing tips. The bridling is thin and strong Dyneema, and devoid of pulleys, keeping things simple and wear free. North have hit the bullseye first go with their bar system and it’s among the best thought out on the market. The safety line runs up a smooth running PU chicken loop rope meaning the interface is super simple and safe. The quick release is a seatbelt push in affair which is super neat and simple and the plastics all feel solid and wear resistant. They’ve had the chance to take a step back, examine all the good systems on the market, chose the best parts and add some special sauce. The phrase ‘well thought out’ doesn’t do it justice. It’s clinical.

In the air, the bar feeling is relatively light and neutral with a healthy amount of feedback, but it’s certainly not going to turn your forearms into sausages when things get windy. In fact, the bar pressure stays more or less the same as the wind shifts up and – surprisingly for a five strutter – the canopy can twist a bit resulting in perky handling compared to its stable mates. From a practical performance perspective, the Orbit almost has two characters and uses. In its lower end it’s a fine, smooth, freeride kite, ideal for cruising about on, and I daresay it’s almost beginner friendly, due to an impressive relaunch and easy sheet power delivery. Then, when the wind steps up a notch and boosting is on the agenda, all that ease of use translates into a kite that’s exceptionally simple and predictable to handle in the top of its wind range, which is very extended and very lofty. An experienced rider can handle the Orbit in a significant amount of wind, indeed our test 9m heading out in excess of 35 knots was very comfortable with a mid-sized twintip. There’s no flapping at all on aggressive looping, with those five struts and all that Dacron not sitting idle. It is impressive that the Orbit manages to achieve a similar level of sheet and lift on demand as its contemporaries but without the need for pulleys on the bridle, which is a cunning feat of engineering in itself. Power when looping is very manageable and you can really feather how much forward pull you would like with simple bar sheeting and the Orbit achieves a level of control in its top end that is confidence inspiring. North needed to make a big impression immediately and in this case with the Orbit they’ve thrown a huge party with a free bar to rapturous applause from the punters.

In a sentence: The Orbit is a fantastic showcase for the experience of the designers behind it, and is a prime example of how easy to use a high performance product can, and should, be.