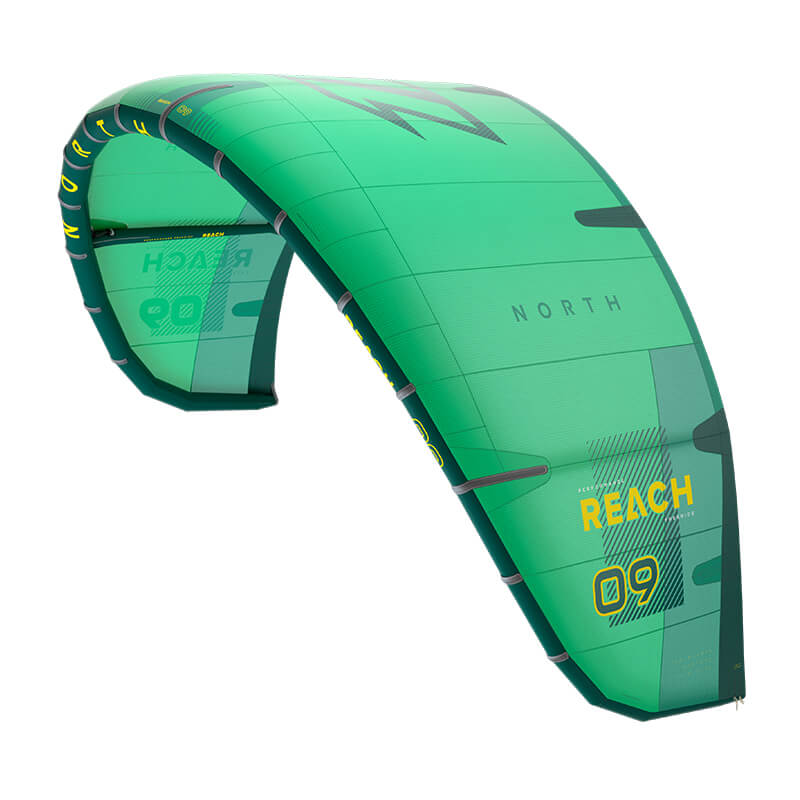 The universal three-strut freeride kite is probably the most popular and commercially successful form factor in kite design terms for most consumers. A simple lightweight kite that seamlessly traverses disciplines has become de rigueur as most riders now ride a range of boards and styles. For North, the Reach has slotted seamlessly into that market sector, and for 2022 sees a comprehensive overhaul.

As with most kites through their range this year, the design brief was to crisp up the handling and extend the usable wind range; they’ve achieved this with a combination of revised materials and further focus on weight saving. N-Dure Dacron is lighter and stiffer than the previous model and the bladder material has also been changed, culminating in a kite that’s around 15% under what it was previously – not a bad score for a kite that was already fairly light and without going into currently high-priced exotic Dacron alternatives. A low-diameter pulley-free bridle minimizes any drag on the front end, and the leading edge diameter is noticeably thinner, with an inflate pressure of 9 PSI to keep a solid airframe and improve upwind performance and forward speed. The struts still have the Kevlar connection to the leading edge, again firming up the airframe. Four rigid mini battens are sewn into pockets on the trailing edge, sitting in the wingtips and in between the strut each side to help eliminate vibration. Extra canopy seaming runs along parallel to the leading edge to help control stretch in the deepest part of the profile section. Whilst there’s definitely been an eye on weight saving, sensibly North have retained scuff guards on the leading edge segments, so you can self-launch with confidence. Overall, it’s a very clean, functional and well-considered build.

In the air, the steering errs on the lighter side compared to its stable mates in the North range, and it has a crisp, perky and user-friendly nature about it. There’s a definite few degrees improvement in upwind performance over the previous model. The sheet-to-power response from the previous kite also remains, but we felt that the sweet spot had been greatly enhanced, with more uniformity across the bar stroke, and particularly when depowered a little, there was far more control available.

On a twintip that pivotal handling produces some relaxing and controllable kite loops which smoothly whip round with a minimum of fuss and climb every time without fail. There seems to be more structure through the leading edge than previously, and as a heavier rider you can now take the Reach out quite overpowered without risking any tip collapse. It produced a more than adequate amount of lift for most, but if Big Air is your thing, the Orbit is definitely still the go-to from the North range.

In a wave scenario, the Reach has had its capabilities massively enhanced. It’s far more mobile around the upstroke than the 2021 model, very noticeable when going through a fast bottom turn, but also of note during general freeride. The kite is always more eager to climb, and when it does, it produces elegant and consistent power delivery. For kite foiling, the lighter build lends itself to earlier flying and a more consistent performance in the low end with predictable drift characteristics, and the light, snappy steering feeling lets you catch the Reach if you do overrun it.

As a rider, unless you are strongly committed to one discipline, the Reach makes perfect sense. It’s going to perform more than adequately whatever you throw at it, with balanced and courteous handling characteristics, smooth power delivery and an intelligently reinforced and lightweight build. If you were traveling to or even live in a location with mixed conditions, it’s going to be the sensible choice if you want a uniform quiver. You can put more or less anyone from beginner to highly experienced on the Reach and no one will come off disappointed.

The all-rounder is perhaps one of the most complex kites to design, as it’s a balancing act between performance attributes to try and please a massive target audience. North have made a great job of it, with a far more nimble and playful Reach that’s crisp to respond to bar inputs and applies itself well to all kinds of wind and water states.