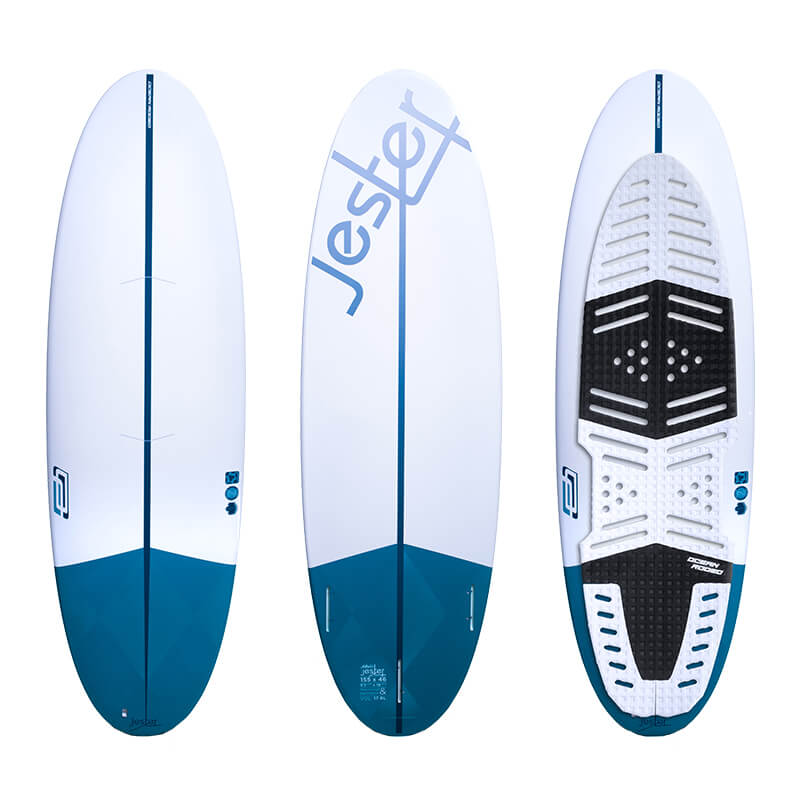 The Jester has been in the Ocean Rodeo line up for a few years and has gained notoriety as the board which is often under GKA-wave-ripper Reece Mysercough’s feet. It is fair to say that this is not a conventional looking wave board and – along with the Mako on the twintip side of the Ocean Rodeo lineup – proves that Ocean Rodeo are happy to go along design lines that break ‘the norm’ if they think they work.

So, what’s new with the Jester 2.0? Well the main difference is the weight. The 2.0 has shaved an impressive 25% off the first iteration which makes a big difference for strapless riding. Couple this with the fact that the Jester comes in at just 17.6 liters in volume, and you have one of the lightest surfboards on the market. Build-wise there is an EPS core with bamboo and carbon reinforcements and bi-axial fiberglass. Despite its light weight, the Jester is super-stiff and feels pretty bombproof. The Jester is now a three-fin board and ships with an EVA grip which runs from the tail to the nose ensuring that your feet should have something to stick to after even the sketchiest of landings…

Our first thoughts on seeing the Jester was – as 75-85kg riders – were we going to struggle on a 17.6 liter board? Closer inspection of the bottom shape, however, indicates that it’s not all about volume, and getting on the water this was evident. The Jester 2.0 has a very deep single concave that runs from the nose through to the tail; it also has very little rocker. The result is a board that needs some grunt to get going but as soon as it is on the plane it rockets along and needs little power to maintain momentum and fire you upwind. Once you’ve adjusted your riding style to accommodate this, it is really nice having such a small board under your feet… We rode the Jester in some waist-to-shoulder onshore conditions and it was incredibly fun to ride; with the wider nose and flatter rocker you need to really engage the tail and lift the front of the board, but when you get it right it whips around and you can truly throw buckets of spray. It will then cut back super-tightly as the thin rails engage and you are ready to do it all again… It’s one of the funnest boards we’ve ridden in these conditions and really puts a smile on your face.

For strapless freestyle the merits of the Jester are clear – the width of the nose makes landing and riding out of maneuvers backwards relatively easy and the even rocker and wide surface area ensure that even relative novices in this department can really ‘stick’ the Jester to their feet. Then the solid upwind performance ensures that you will be back upwind ready for your next boost or wave in good time… Overall we were equally impressed and surprised by the performance of the Jester, and would say that for ‘real world’ conditions it has a lot to offer that you won’t find elsewhere.