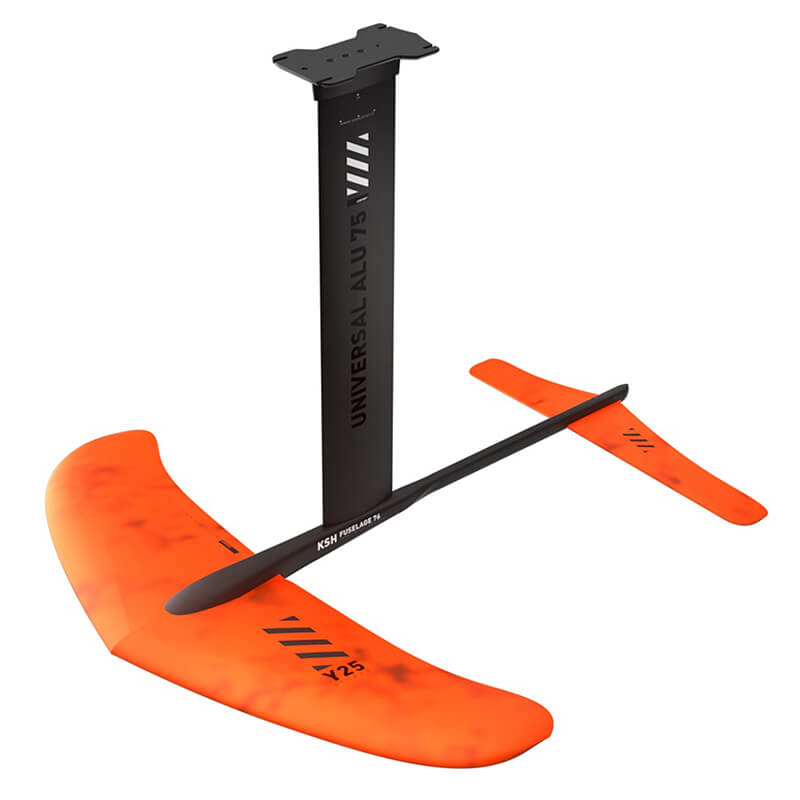 In the brave new world of foiling, it is very difficult to produce a foil that you can genuinely say is relatively ‘future proof’. There is such rapid development and foils head in such a huge number of different directions in terms of design that – to anyone just starting out in the world of foiling – if you lined up all of their options, it’s pretty likely their head would explode. RRD have acknowledged that and want to make your life simple: they have their Universal Foil. Which – helpfully enough – can also be used for wing foiling and surf foiling. It’s a Universal Foil, get it? Aside from its adaptability, the price point is also a big selling point. You can get up and riding on the Universal Foil for the cost of a replacement front wing of many of the top end foils.

Build wise and the wings are built with carbon and PU, providing a good balance between strength/stiffness and durability/cost. They are, of course, finished in RRD orange ensuring that if you forget to tighten the screws and your foil falls off, you have a good chance of spotting it against the seaweed at low tide… The profile of the front wing is super thick – thicker than any kite foil we have tested – and the thickness is maintained throughout the foil. The mast is aluminum but with plastic ends to slot in at either end, thus eliminating oxidization. Once assembled, you have an impressively rigid set up. Certainly not the lightest foil on the market, but it is not trying to be.

On the water and it is best to assess the Universal Foil from two different perspectives. Firstly, if you are a beginner and are about to embark on the addictive pathway that is ‘foiling’… With this in mind, we would say that the Universal Foil comes in as simply one of the easiest foils we have ever ridden. The relatively large wing coupled with the thick profile ensure an incredibly smooth and predictable lift initially and then gives you enough time to engage that all important front foot pressure. If I look back on the hours I spent learning to foil eight years ago, I think you would have reduced the frustration by about 95% riding this. It is as easy as foiling gets and for an intermediate kiter, you would expect them to be getting their first few decent runs in within a couple of sessions. This lift and stability are also what ensure that the foil also works with surfing and winging, but don’t count this as a negative for kiting…

For more experienced riders, the Universal Foil may initially feel like a step back, but in this new world of foiling with blurred lines between the different disciplines, we didn’t find that. The lift and stability mean that you don’t just need to stand there, you can get the foil up and ride it with a kite a couple sizes smaller than with other foils, and can then really enjoy carving the foil around (especially if you have some swell to play with) and can also pump through lulls or flat sections in the surf. If you are working on foiling transitions, then you buy yourself (at least) an extra second of float to get your feet switched and turn the power back on and gives you the confidence to really push the limits of what you can do with your foil riding.

In a sentence: The Universal Foil provides the perfect platform for starting off on a foil but also provides a well-tuned and super fun platform to take your foiling skills to the next level.