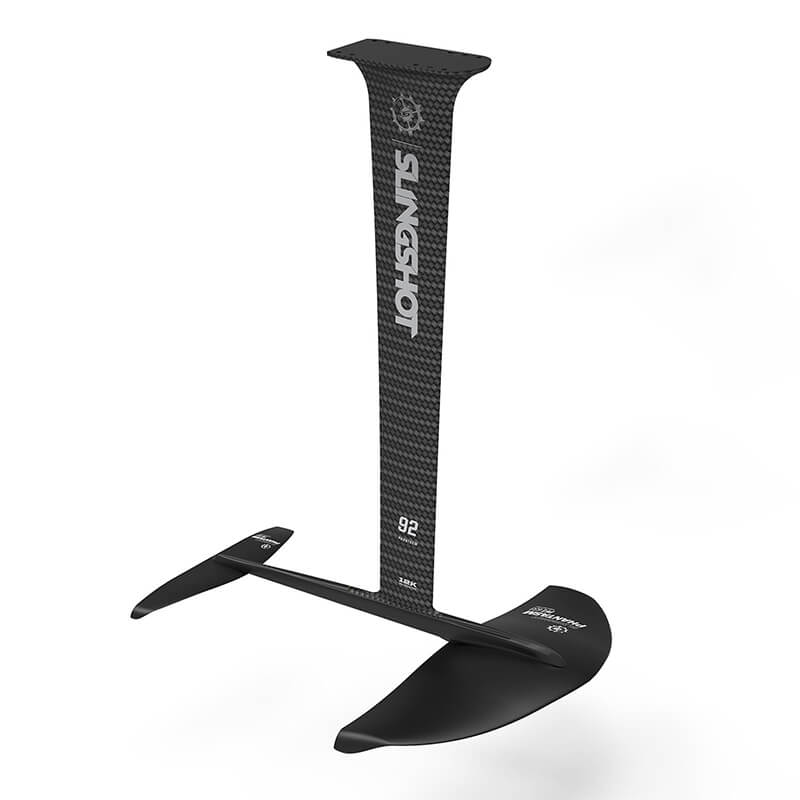 The Logosz designed 633 front wing has earned a cult following in the freeride foiling sector, and has set the standard for an accessible and entertaining foil system with exceptional pitch stability and the potential to push the top end much further than expected from a speed perspective. It’s come with a few different brand badges due to the shared production for the full carbon version, the Ghost Whisper 91, and in the form of the Apollo wing for Slingshot’s well-established Hover Glide system.

There’s been distant rumblings about a new full carbon foil system from Slingshot for a couple of years now, and rather than rushing to market with something they weren’t happy with, Slingshot have worked long and hard to get the production right on the Phantasm. We can confirm the wait is well worth it.

Due to its enormous popularity, comparisons with the old shape 633 are going to be made, so let’s get them out of the way early. Downturned winglets on the front and rear wings increase the yaw stability which was one of the original 633’s potential sticking points. It remains an amazingly easy foil to carve a turn on, but round the corners the Phantasm is far more engaged, and the banking ability for swooping surf foil style turns is increased. In the top end the speed remains very comparable to its predecessor. The Phantasm features a beautifully sculpted 12k carbon mast with a molded-in tapered base for the board connection. The long mast foot has plenty of extra options for the track mount, giving you the ability to attach it to more or less any board, regardless of how far fore or aft the track position. It also spreads the load further across the laminate of the board creating a rock-solid connection.

The fuselage to mast connection has been elongated, and three M6 bolts keep things tightly together, and it allows compatibility with larger front wings if required, which the aluminum fuselage has a longer top slot to accommodate. The downturned winglets also make the foil a little safer for a novice. The package is well presented in an excellent carry case including neoprene wing covers to keep things safe on day to day beach trips, protecting your pride and joy effectively.

Slingshot have genuinely improved a benchmark product with the Phantasm 633. Sure, there’s a negligible weight increase over its full carbon predecessor, but the tracking improvements and much increased stiffness through the system is definitely worth the few extra grams. The lack of flex in the system translates your every nuanced movement down to the foil, and gives you more confidence blasting through chop and making deep banking turns. They’ve taken the original 633 and given it grip like an Audi Quattro four-wheel drive system and it’s undoubtedly an entertaining surfy foil to ride and progress on.

We paired the Phantasm 633 with the latest Dwarfcraft 120 pocket board from Slingshot which has had a nice rework this year. The largest of three available sizes, it packs 24L into the relatively short length board, and sports a grippy and comfortable corduroy deck pad, laid into a gently concaved deck. It also seems to be a few grams lighter than previous and makes for an early planing and accessible platform for freeride foiling. It takes off with ease, has very little swing weight and suits the Phantasm 633 hydrofoil well. If straps are your thing, they’ve included inserts for all configurations, and it would double well as a tow foiling or dock start board.