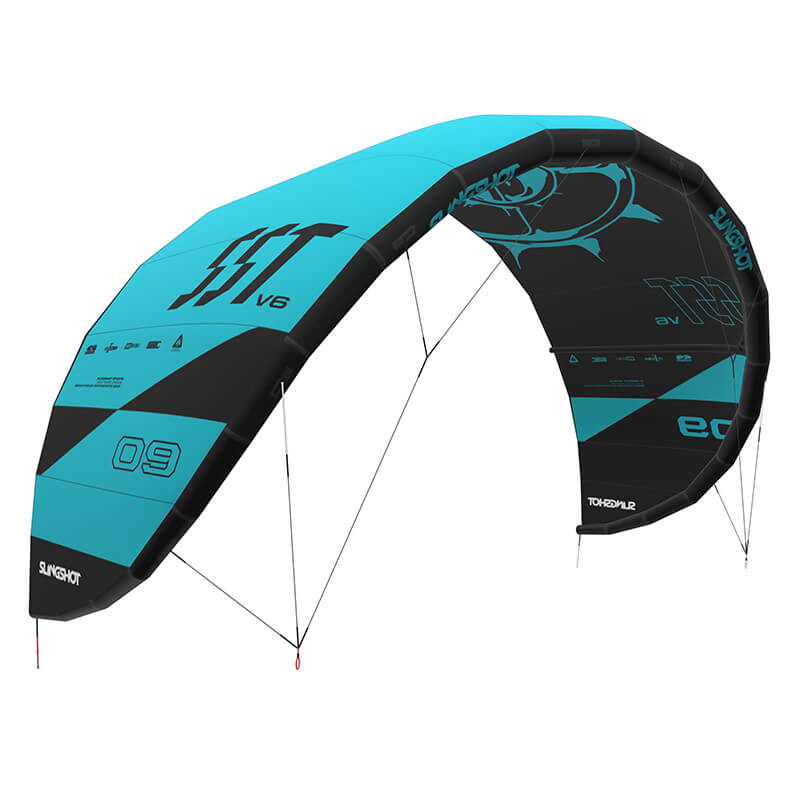 It’s no secret that kite wave pioneer Ben Wilson has re-joined the Slingshot team after developing his own brand, and brings a fresh and experienced set of eyes to the Slingshot R&D department. The SST has had five iterations, all of which build on the same solid and well-received platform. The new V6 heralds the most significant redesign in the product line’s legacy, and it’s clear that Ben has been able to breathe some of that self-earned product development knowledge into the new model.

Visually it’s a very different beast in the sky and there’s some stand-out new features for anyone familiar with the previous kite. Slingshot have implemented some ultra-skinny struts which reduce drag and weight, and efficiently push profile back into the canopy quite a way into the tip. What Slingshot have retained is the overall arc shape and drawn-back leading edge from the legacy model, but with a significant redesign in the wingtips, which are thinner and more extended, enabling a more crisp turning response, and better nose-to-tail balance, increasing stability when the lines are slack.

The Slingshot UFO has been quite a benchmark in drift for a mass-market strutless model, so it was inevitable Slingshot would employ some of the lessons learned there. The highly simplified panel layout and significant weight reduction is a strong example of this, along with a thinner IRS bridle, for further drag reduction.

In the sky, the aggregate weight loss in the kite definitely translates into a wider wind range, and more perky, but not too pivoty turning characteristic. It definitely delivers a pleasant pulse of power on turning, and lets you drive around a bottom turn with decent speed. The increase in overall efficiency in the new SST means exceptionally easy upwind capability and a more linear power on sheet, power delivery.

From an intended usage perspective, the biggest change in performance is without a doubt in straight down-the-line drift. If you’re the sort of rider who has the luxury of riding sideshore conditions regularly, and don’t want to worry about constantly trimming the kite to keep it flying, then the new SST is going to be an asset. All those design tweaks towards efficiency and weight loss aggregate into quite a change. Overpowered, the amount of lift and power dump available translates to a great platform for strapless freestyle.

We were also surprised how wide the range of the SST V6 branches into the freeride sector, if you weren’t aware it was designed as such a wave-specific machine; it performs admirably as a daily driver. The bulk of those wave-specific attributes – drift, playful handling and inherent stability – translate very successfully into a fun kite to blast around on with a twintip and of course have a strong hydrofoil application.