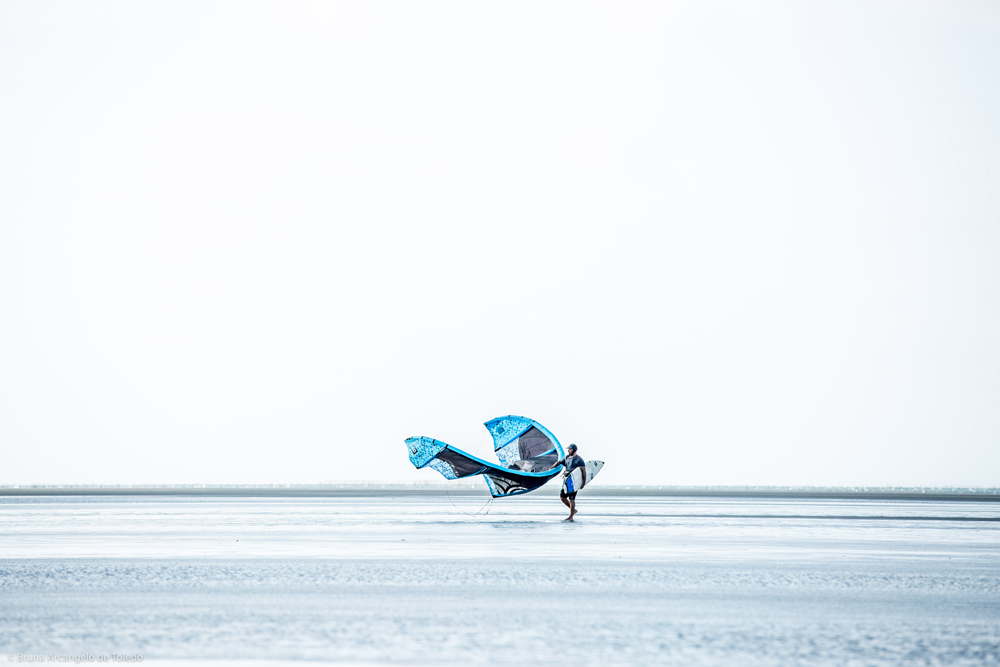 As I stare at the giant flippers sticking off the end of the bed I think to myself, man, does Norm ever have big feet… He slumbers away in the bed next to me, sawing logs while falling asleep listening to poker on the radio. Who falls asleep listening to radio poker? With a couple of grunts and farts, he wakes, pulls back his beauty mask to reveal his puffy swollen eyes, and gives me the middle finger with a smile. Good morning! He wears the beauty mask every night to sleep, but I don’t have the heart to tell him that it isn’t helping. He’s still ugly. But the perfect bunk mate on this epic journey. We keep each other humble with the endless ball busting. He’s a unique cat to say the least, and one super cool dude.

We roll into the dining room, late as usual. Either we enjoy sleep too much, or the others prefer food over slumber. Wandeson, our guide from Surfin Sem Fim places an option on the table for the day. If we can dine and dash quickly enough, we can catch high tide, allowing us to enter the countless river delta’s that will cross our path today. All in favor say I. We all say I.

As always, Mayor Sebastian and Governor Mitu pose with their adoring fans for a few quick pics before we can depart. I’m actually waiting for the day when a girl throws her panties on stage for Mitu because he’s got the moves like Jagger. I’m sure it’s happened, but he denies everything with a devilish grin. 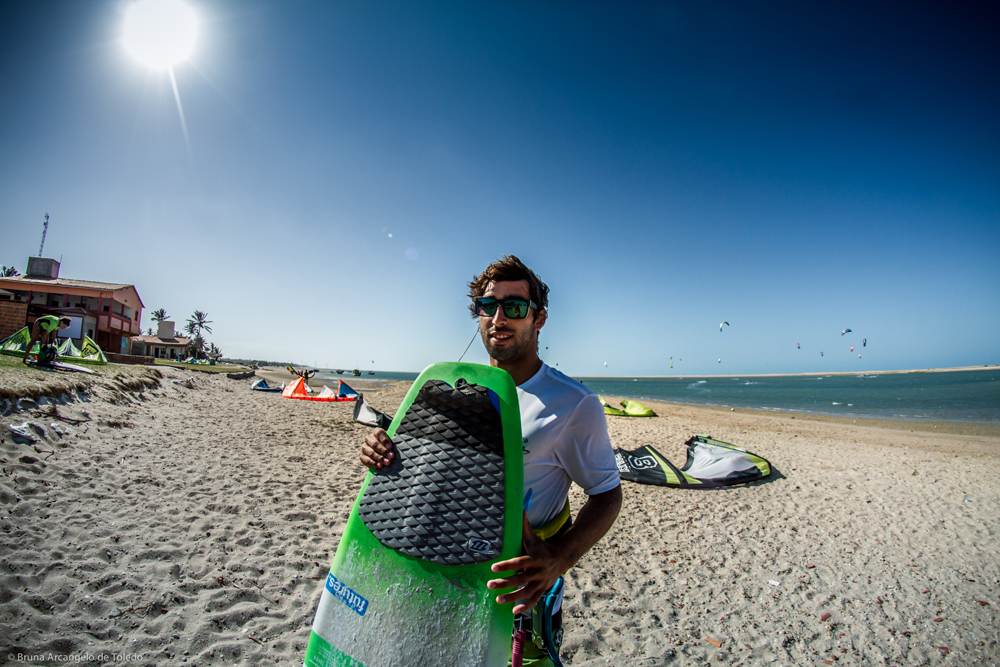 Today we’re on our own. The river delta’s of the north coast begin today en mass, making vehicle support impossible other than at strategic meeting points. With a GPS strapped around my neck, a waterproof bag with emergency SAT phone and other life saving essentials on my back, we embark on a real adventure. Now we are really starting to get into the secluded and remote areas of Ceará, Brazil. Wind turbines, endless beach break, abandoned shipwrecked fishing boats, and blue water is all we’ll see for the next thirty kilometers until lunch. 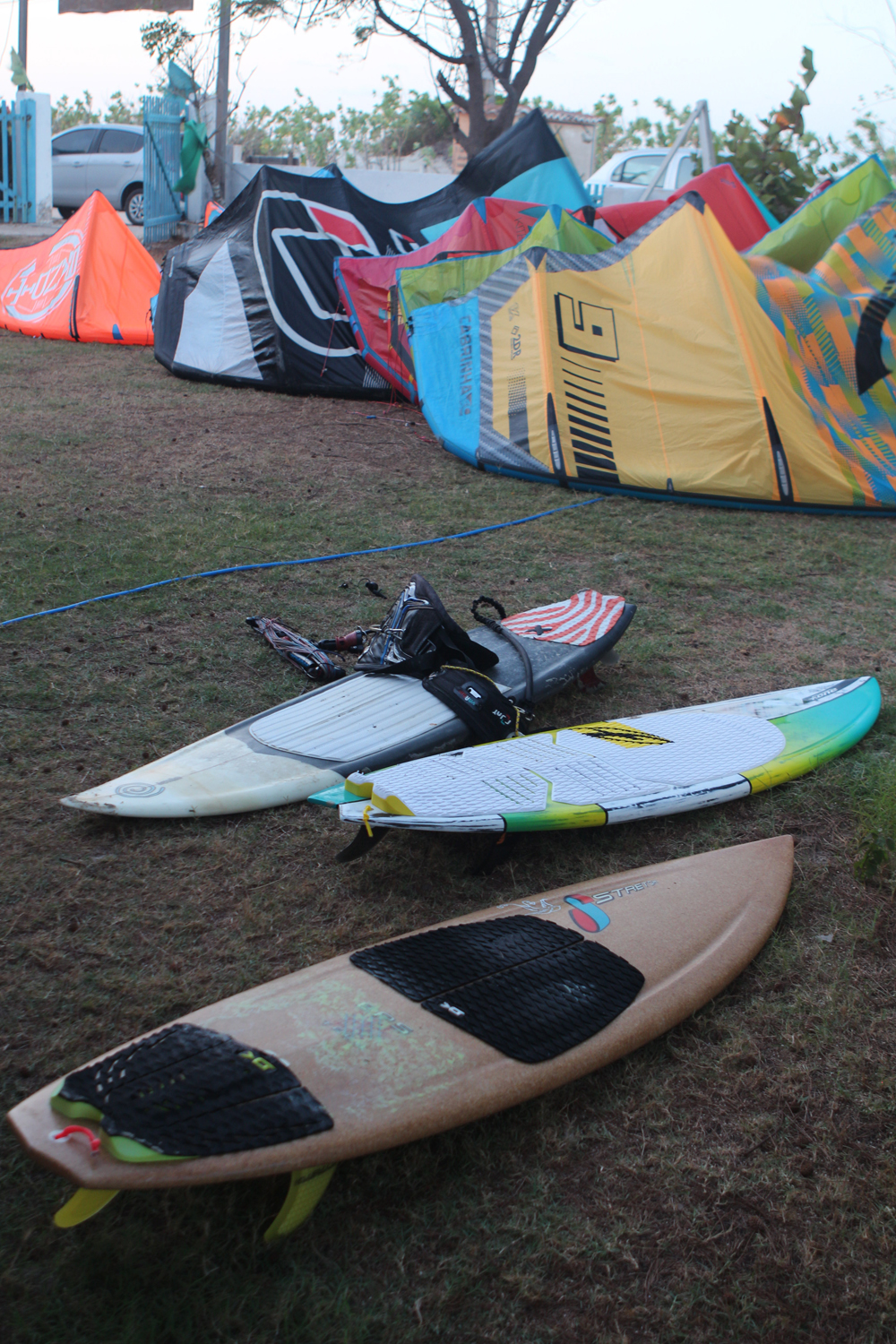 If you like to kite down the line, then this is S turn heaven. With the kite parked in perfect side offshore breeze, I fly down the shore break cruising the knee high waves with the fluidity of a super G racer on perfectly waxed skis. It’s so smooth; it’s almost effortless. The natural rocking of the waves cradles you to the bottom, and slingshots you back to the top over and over again. Like a marching band in formation, we run single file for miles only meters from the beach frolicking in the sweet sweet waves. 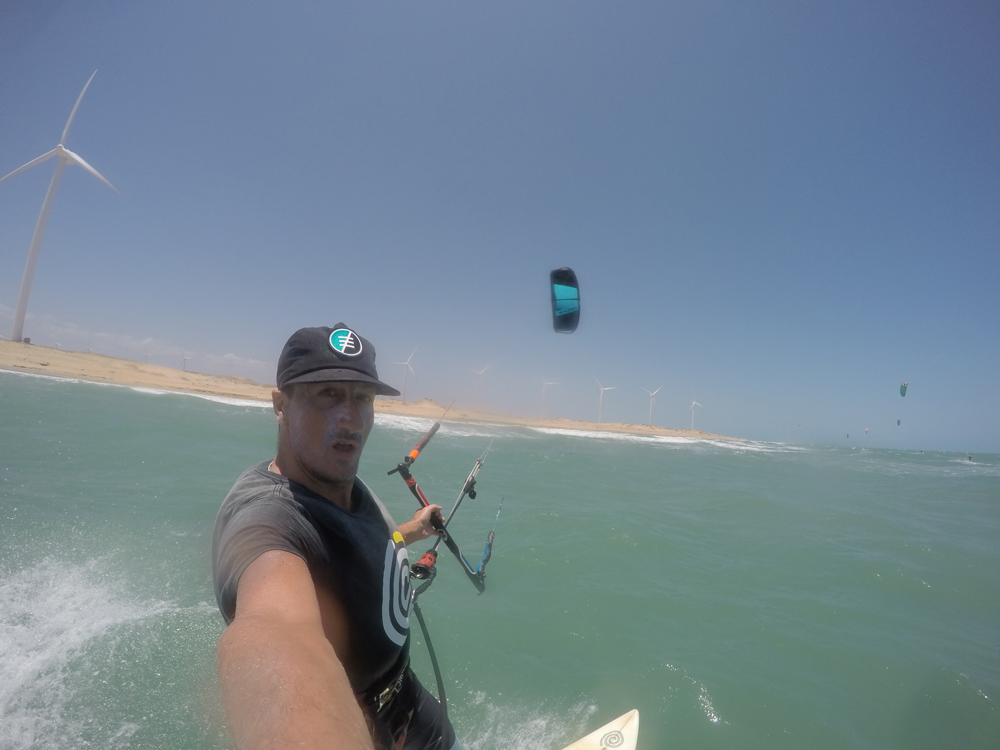 Mitu is the first to run over the dune, hinting at a secret he doesn’t want to share. But where Mitu goes, we go. Reaching the top of the crest, our eyes glance across our first river delta entering the Atlantic. It’s stunning. Flat fresh water paradise, with the same ocean breeze riding in over the top of the dunes; barely a ripple disturbs the surface. On the ocean side, white sand dunes run parallel to the shore break. On the leeward side, mangroves grow lush into the fresh water. And turquoise blue waters split the divide. Magical. 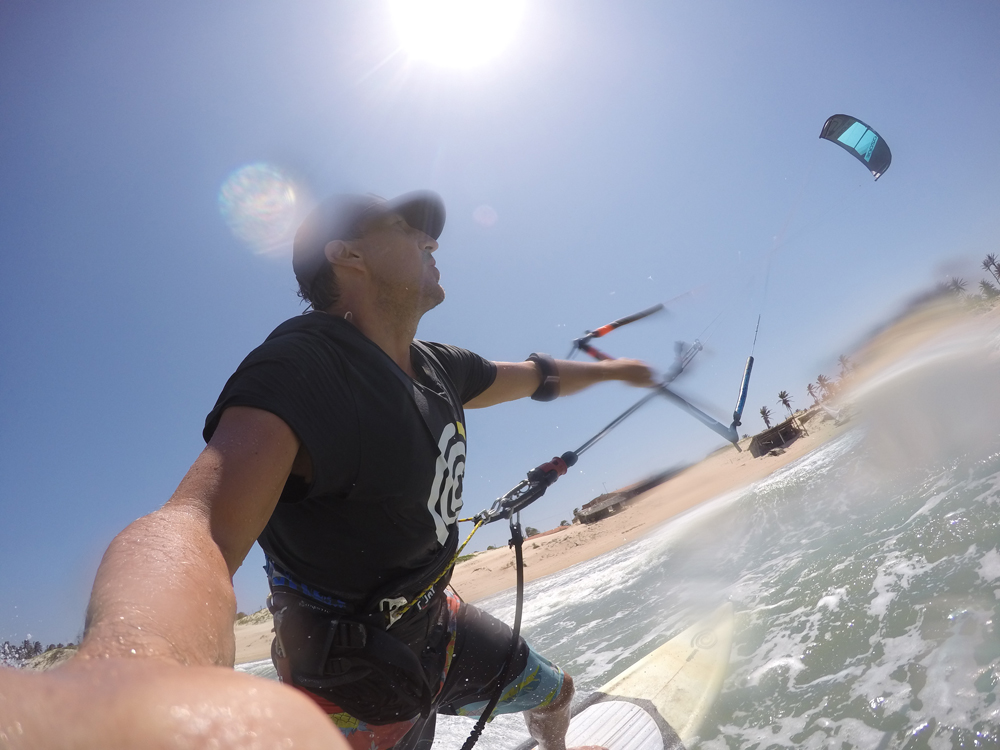 We take a small break on the dune at the beginning of another river delta. Sebastian and I play kite wars as we try to intentionally bump each other’s kite out of the sky with the others kite. As I’m the narrator, I say I won that round. Wandeson advises against riding this particular river channel as the trees on the windward side of the river are tall, and can create serious havoc with your kite, making the route treacherous as the possibility of dropping your kite into the river or (even worse) into the mangroves a serious reality. Miles from civilization, his wise words make sense. But like juvenile kids listening to the new school principle, we nod and smile, then do the complete opposite. Drop my kite? Never! Don’t you know, I’m a pro?! So like an asshole, I drop my kite in the river in the wind shadow of the towering trees. And I’m not the only one. Who’s the smart guy now? Not I. 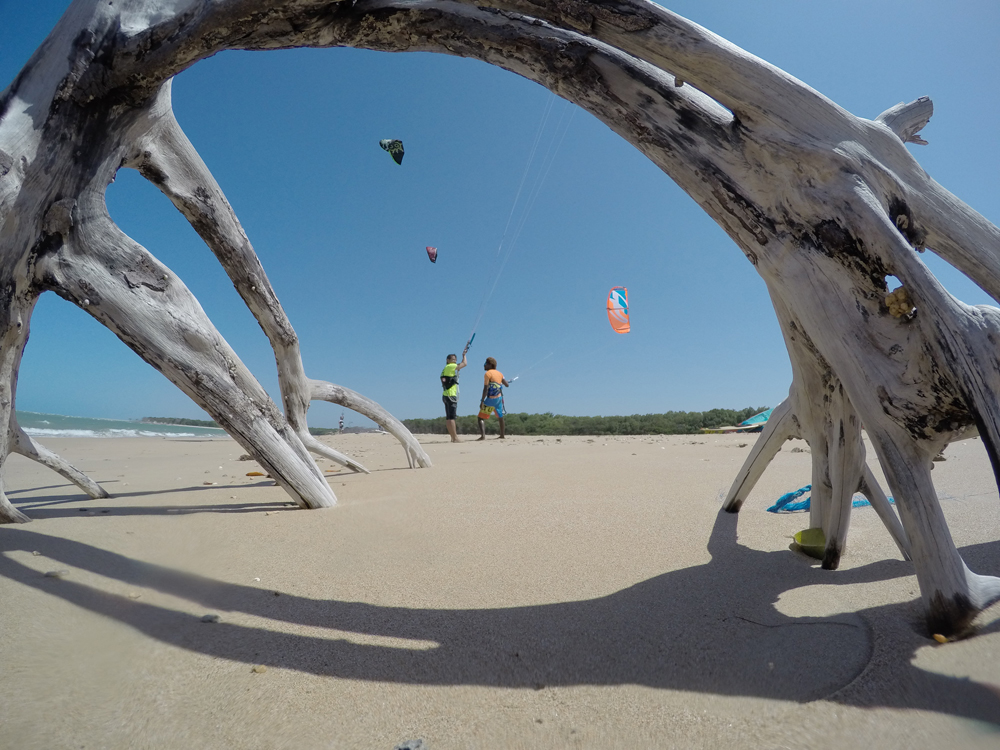 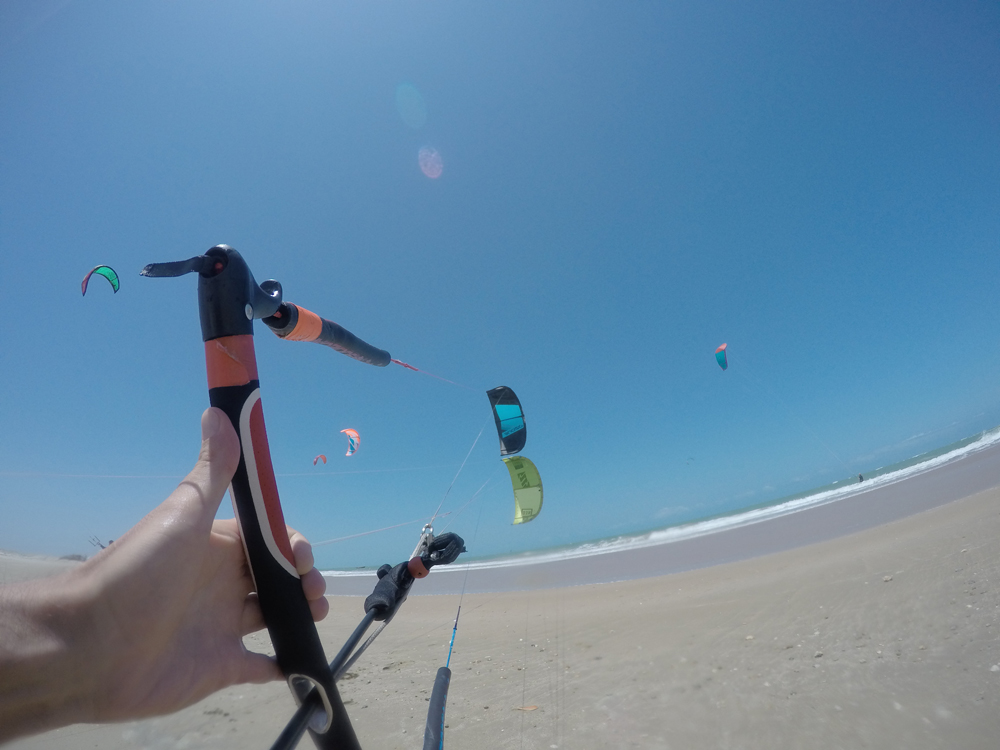 Fearful of dropping his kite, Mitu laughs, wishes us luck, and trots off to safety outside of the wind channel void. I see him laughing in the distance as I wrestle my kite like Andre the Giant at Wrestlemania, hoping that a small gust from heaven will appear and miraculously launch my kite. It doesn’t. So I swim, a while.

At the end of the river delta, after finally relaunchng my kite, we arrive at our oasis in the desert – Ilha do Guajirú. A freestyle rider’s paradise. The river is wide and flat, and the beach bar is ever so inviting with cold drinks and fresh Açai bowls with granola. It’s always entertaining pulling into these little kite mecca’s in Brazil with Mitu and Sebastian as no one knows we are coming, so their arrival always causes a frenzy. The consummate pros, they’re always humble and happy to meet their fans. They pose for pictures, sign shirts and kites, and make endless small talk with anyone who walks up. Patience of saints these men have. 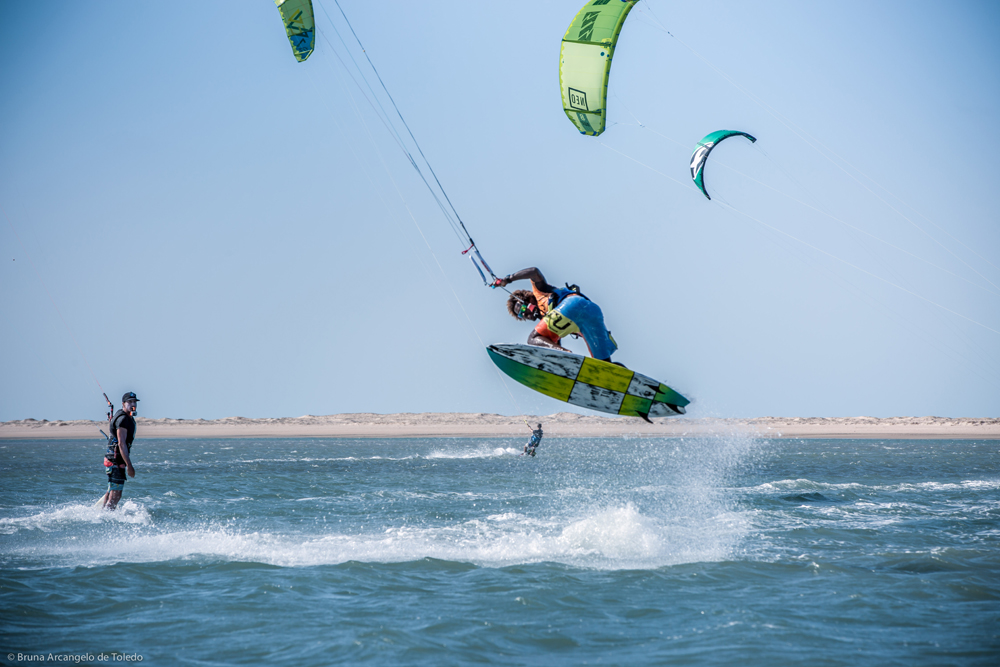 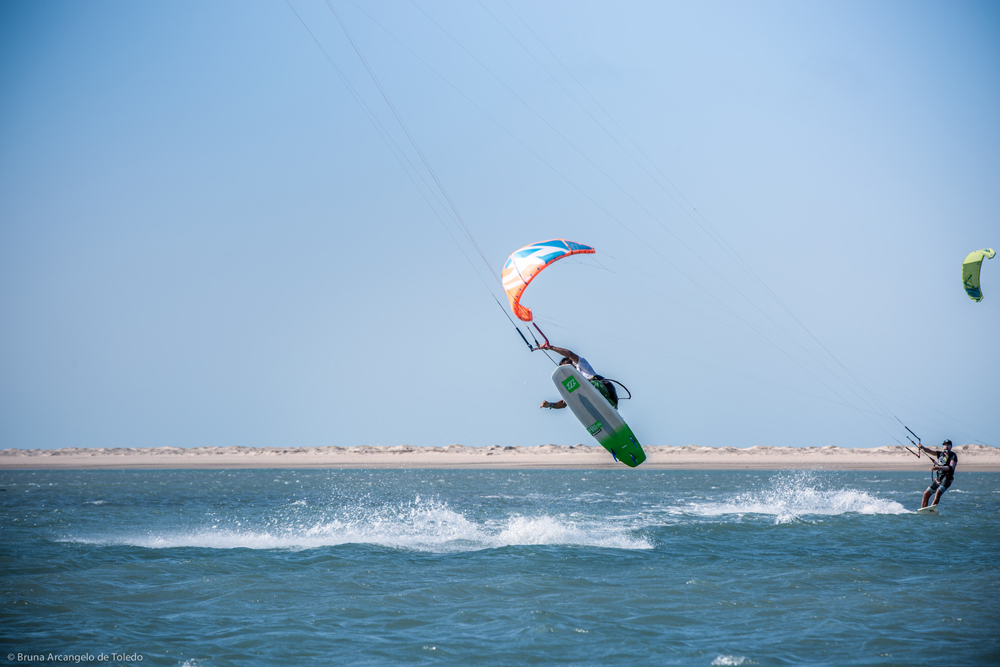 Before we embark on the second leg of our daily voyage, Mitu and Seb put on a freestyle strapless clinic for the crowd that has now gathered on the shore, hoping to see exactly that. Rodeos, 360’s, Jesus walks, every strapless trick under the sun, and the crowd can’t get enough. We’ve lingered too long, and now need to make haste as the tide is dropping quickly, and we need to reach the end of the river delta before our quick commute on a surfboard becomes a long walk in a river bed too shallow to ride. It’s a race against time, and we are losing. The space between the bottom of my fins and the sandy silt is getting smaller by the meter. We’re all finally forced to flip the board 180, and ride them backwards; fins out so that we can cover the last kilometer of water before there is no more, and we’re all forced to walk. 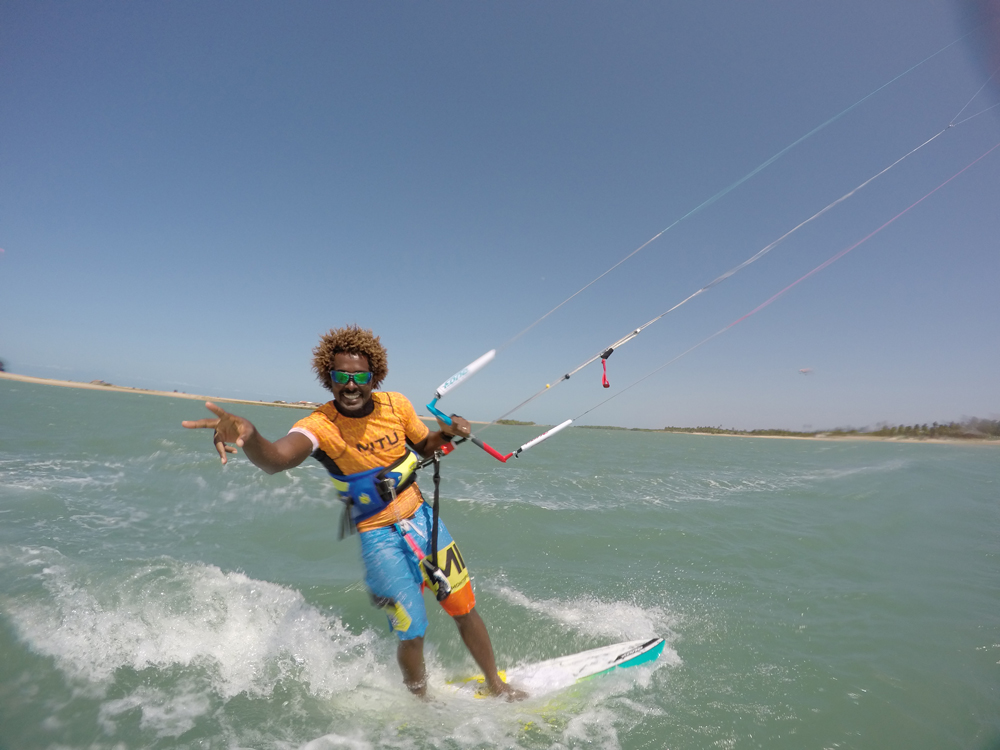 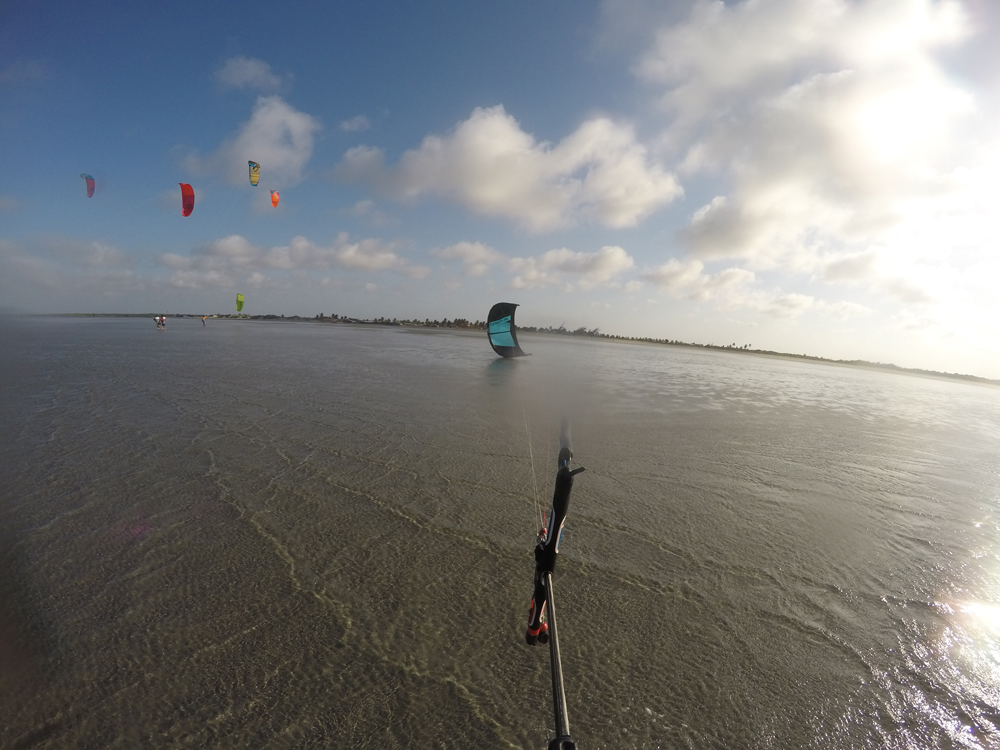 We’ve cleared the delta, but we aren’t out of the woods yet. As we lingered too long at lunch, we now risk missing the tide altogether to make it to our final resting spot for the night, Pousado dos Canoas in Arpoeiras. Like Ayrton Senna, we bee line the turbine strewn coast racing the dropping tide. I’ve never gone so fast, so far down wind on a kite in my life. Two loops on the right, two on the left, again and again, keeping speed and power in my kite, skipping like a pebble across the flats. We’re going so fast, it felt like we were almost underpowered as our kites kept dipping and diving out of the sky. Only when we reached our pousada, did you feel the full power of the wind, a solid 30 knots. She was blowin’. 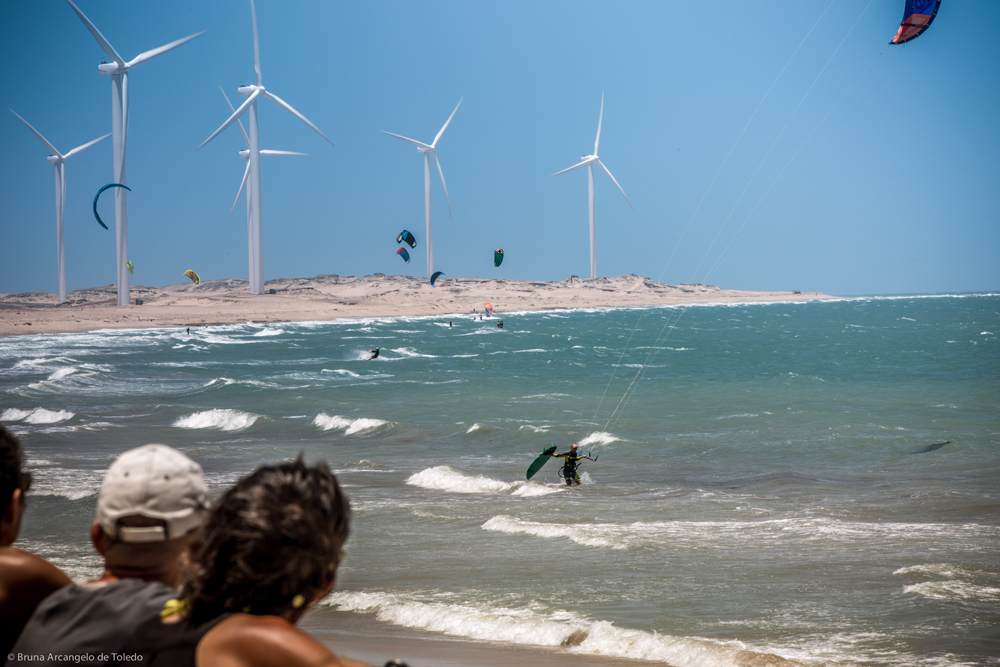 Our race with the tide came up 500 meters short of the finish line. Board in hand, we walked our kite in the air like well trained labradors across the dark sand that is so fine it feels like you’re walking on icing sugar. After 5+ hours grinding my feet into my board pads, the softness of the silt is like satin on my toes. Heavenly. 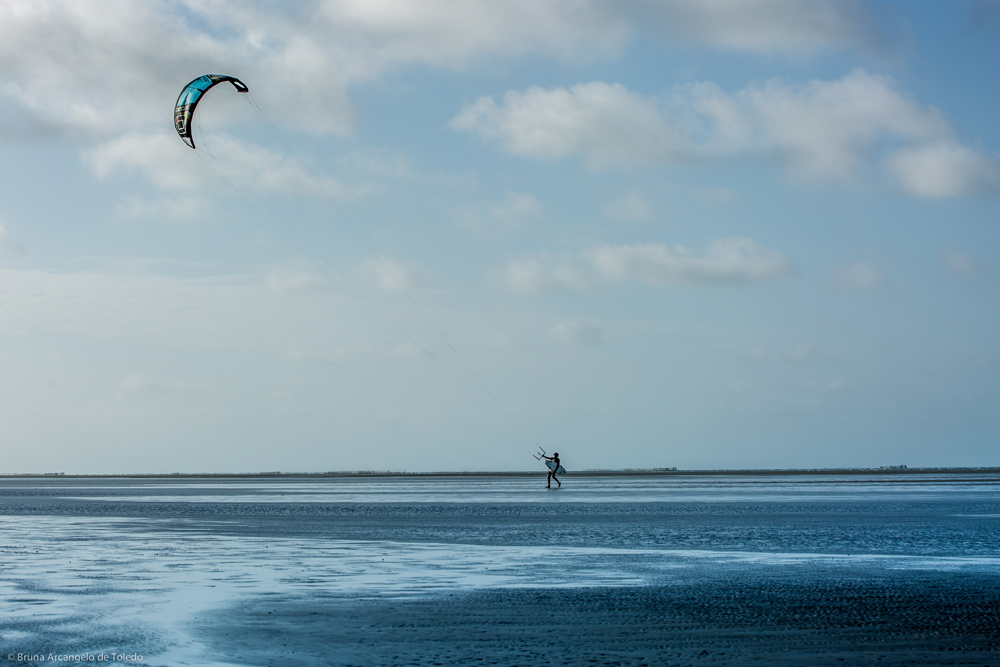 Walking up the beach towards the pousada, Mitu passes me in the opposite direction with a plastic bucket in his hand heading back out into the silt flats. “Going to make sand castles in the sand,” I jokingly proclaim. “Nope. Going to get appetizers”. “Appetizers? What? Where?” Ok, now I’m curious. I follow Mitu out onto the flats to see what he could possible be talking about, because I don’t see anything that resembles food on the dark satin. We walk out several hundred meters where the flats are still wet from the receding tide. “There. You see that small hole? That’s our appetizer.” I still have no idea what he’s talking about, and am starting to think he’s spent too much time under the hot sun and is becoming delirious. He drops to his knees, jams his hands into the sand, and pulls up a handful of fresh clams. Genius! 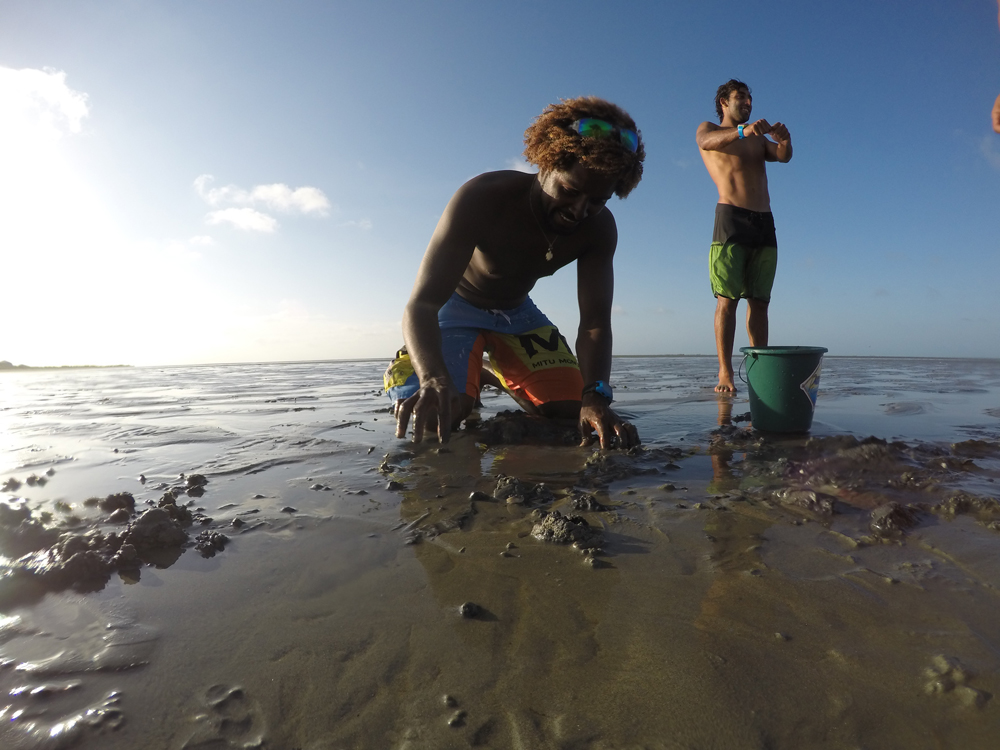 Instantly we are all on knees like two dollar hookers on one dollar Tuesdays, digging in the sand like elementary school kids at recess. Bucket full of shells, we head back to the pousada and hand our fresh haul to the chef who proceeds to steam the fresh clams to perfection, and voila, appetizers are served. 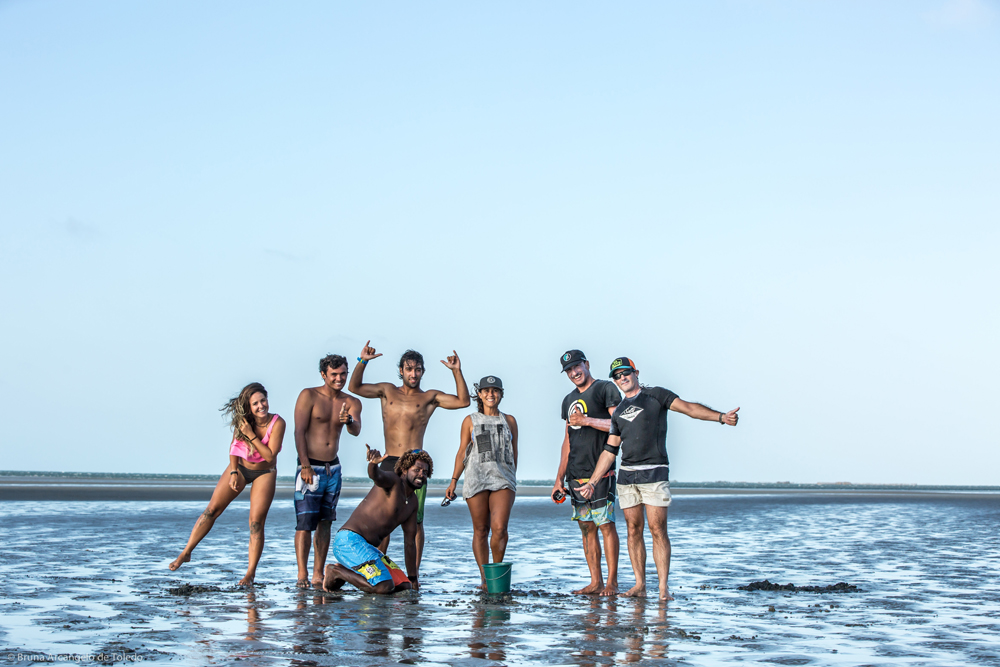 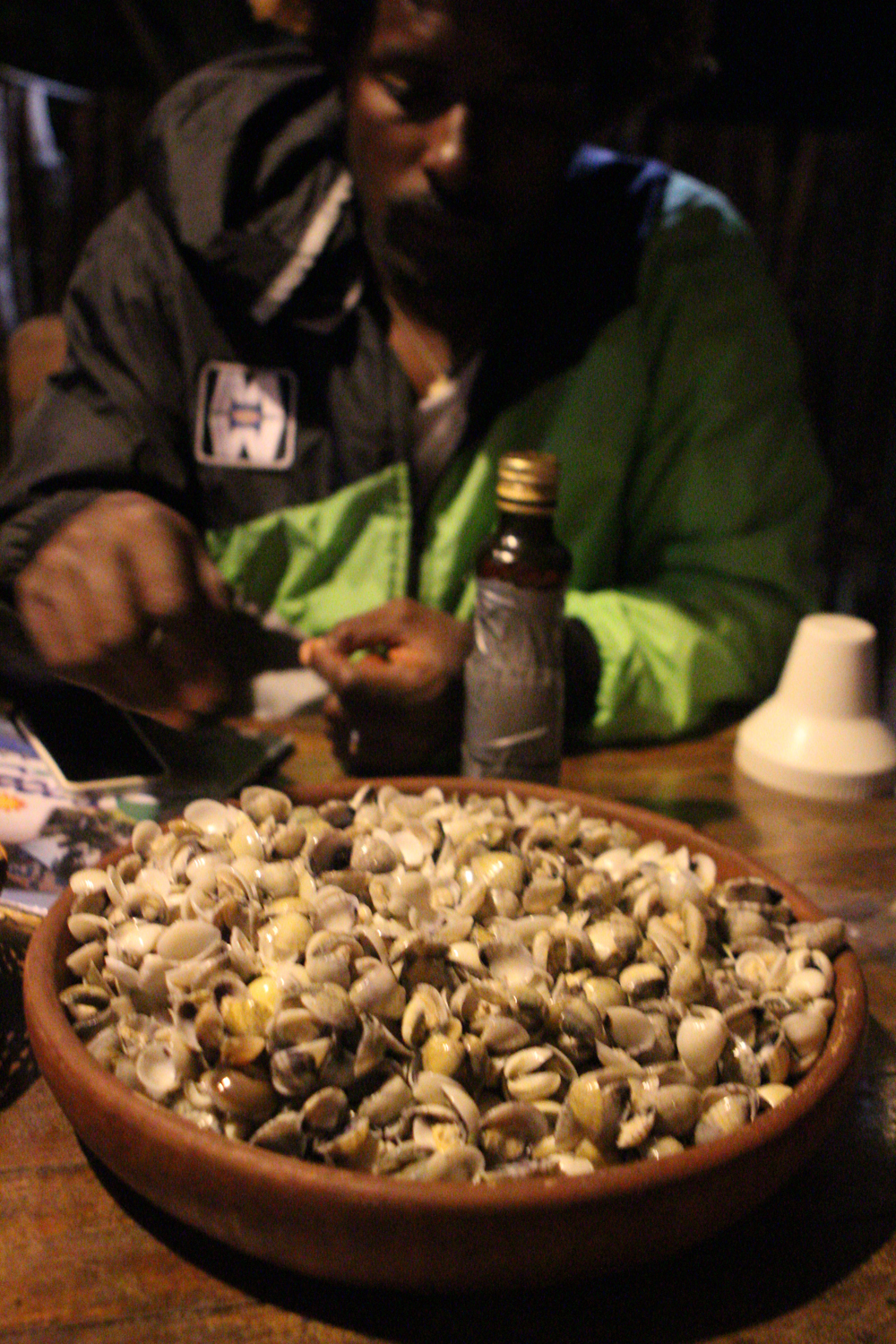 As usual dinner is fresh and delicious. Served on the beach under star filled skies, we feast and trade our greatest kite stories. Again all pale in comparison to Mitu’s world kite travels. I have to admit he does have some of the most amazing tales of adventure on the high seas. They never get old to listen to. Post feast we lounge by the beach bonfire, dessert on some crème caramel, and begin to count sheep in our minds eyes, dreaming of tomorrows adventure. 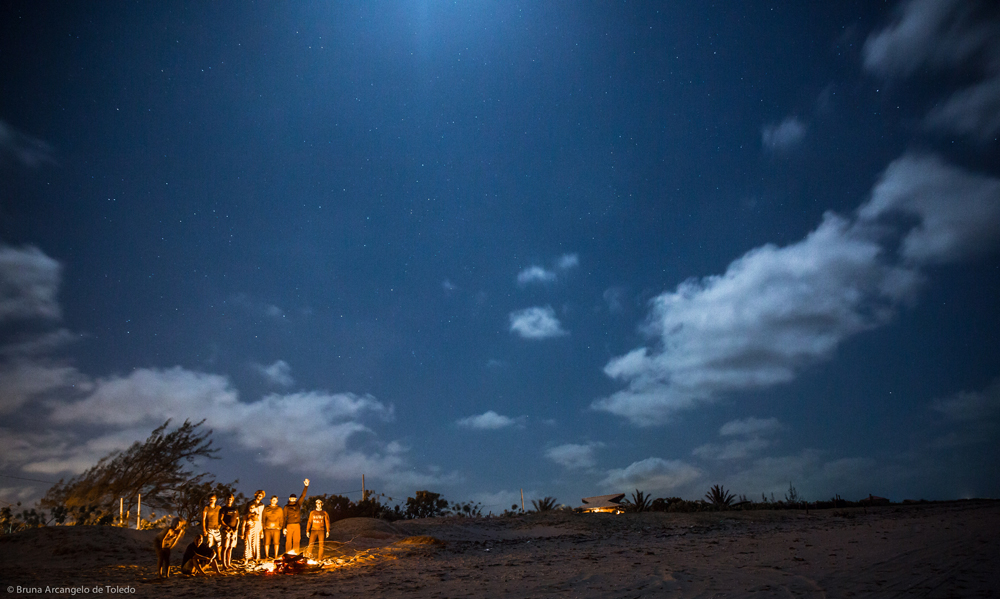