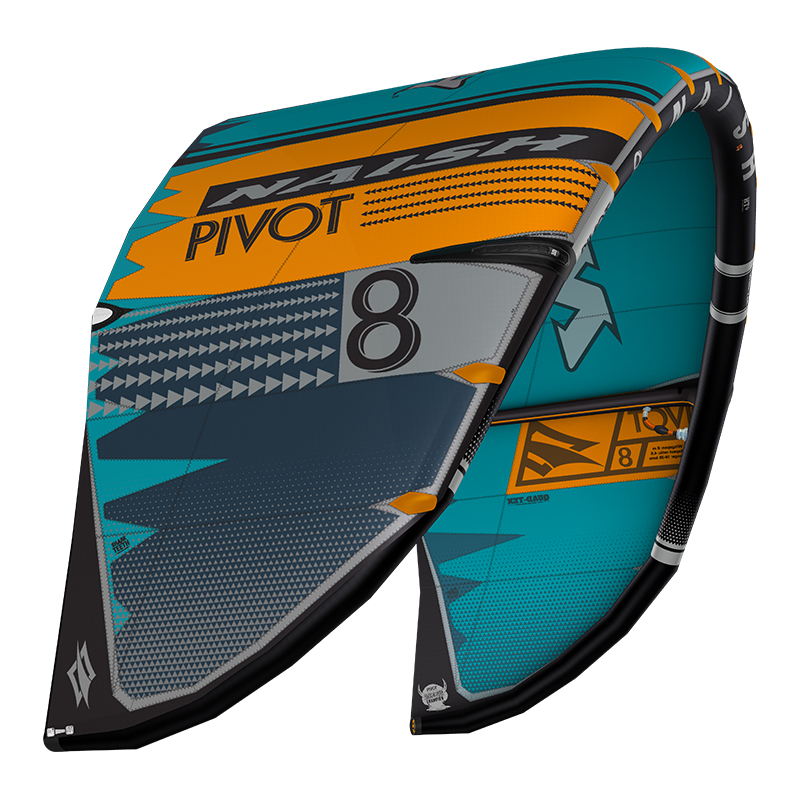 The Pivot has been around for a few seasons now and, as with many designs, its most notable moment occurred as a happy accident. Naish’s lead kite designer Damien Girardin originally sculpted the Pivot as a pure wave kite to help him improve his strapless surfboard riding on Maui, aiming for a fast turning light kite with enormous angle of attack change and power dump ability, whilst maintaining stability and handling. What he unintentionally created was also a formidable boosting machine with reliability in its top end, which has now taken Kevin Langeree to two Red Bull King of the Air wins.

The main changes this year from an aerodynamic perspective is a slightly fuller wingtip which helps the kite feel a little more balanced, and its drift ability has also improved considerably. Then some new canopy seaming has been added to even up the line tension towards the center of the kite. Bar feedback on the 2020 edition has been increased but is still fairly light and extremely sprightly with two slider pulleys helping it whip left and right with extreme ease. The turning speed is still as rapid as ever, and extremely rewarding to fly once you tune in. Pivot by name, Pivot by nature. Build wise, the long-standing internal Octopus inflation system has finally departed and been replaced with a more simple to maintain high flow external system with 9mm pipes. The leading edge valve has also been swapped out to the inflatable SUP style, which allows for super easy inflation to achieve the 11.5 PSI requirement, which is still unique in the industry and makes for a rock solid airframe with a relatively small leading edge diameter. The use of Teijin Quadtex ripstop has allowed the Pivot to be refined in its build, shedding those all-important grams using less Dacron whilst maintaining stiffness in the airframe. Considering the kite is on a three strut platform, and many of its equivalent models from other brands are on five struts, the top end stability of the kite is extremely impressive, which is in no small part down to the high inflation pressures achieved with the new valve and high tensile leading edge thread.

Riding the Pivot is as fun and engaging as ever. That enormous amount of power you can develop with the bar sheet hasn’t changed, and neither has the infamous top end. It’s ridiculously easy to access very big air, and the silken handling has been tuned to give you a little more feedback than before and helicopter loop your way down to a precise landing. As ever, looping the Pivot is very progressive and easy to control and it climbs exceptionally reliably. Another party trick of the Pivot is the wave crossover ability, providing constant drive in the turns when you want it and an impressive power dump on the bar. Being such a fast turning lightweight kite, it’s no slouch with a hydrofoil either. The Pivot is a rare and highly versatile beast and, with a kite that works so well in so many disciplines, it almost makes you question why you would need any other kite. There’s a definite increase in the Pivot’s usability this year, letting a less skilled rider find it more accessible and stable but there’s no discernible compromise in the out and out performance as a booster.

In a sentence: The Pivot is a work of pure design genius packed with some tangible innovations and is a beautifully refined example of a performance crossover kite.